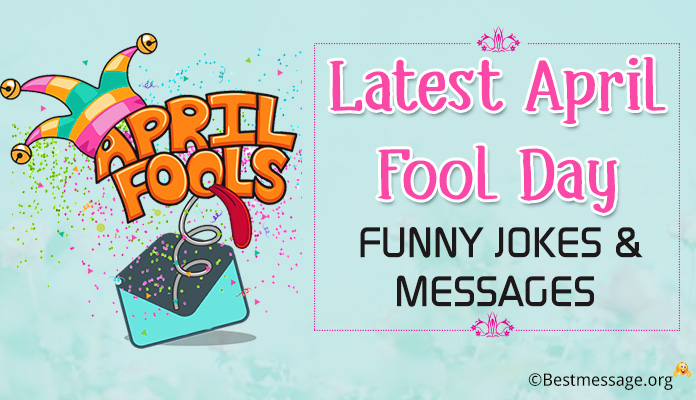 Send Good Funny April fool messages, April fool Funny jokes to all your friends and family and generate fun on this day. Enjoy this day by sharing funny April Fool jokes and pranks Messages in Facebook and Whatsapp.

1. A popular study revealed that fools use their thumb to scroll in their mobile. Don’t try to change. The results are already out.

2. All the men who felt ignored on women’s day, don’t get disappointed. Your day is coming soon April 1st.

7. If you take all the fools away, then you won’t know who is a wise person. Happy Fool’s day

8. April 1st is a perfect day to propose and not February 14th. That’s because you either get accepted or you can brush off as a joke.

9. You don’t have to wait till April 1st to be called a fool. You are already a fool.

10. There is one heart which will beat for you forever, it’s yours

11. You are a friend worth a million dollars. I have auctioned you

12. My boss cracked a joke and everyone laughed except me. I am in my notice period.

13. There are a lot of languages spoken. Laugh does not require any translation. Enjoy your April fool’s day.

14. Today I the day when no one takes anyone seriously. Happy April fool’s day

15. All great people’s birthday is remembered. I remember yours too. April 1st. The biggest fool’s birthday

16. I swear by anything that I will not make you a fool on April 1st. This is because I don’t have to prove anything.

17. There is someone who is feeling lonely, feeling bored dying for you company – guess who, Monkey in the zoo.

18. My darling, you are so cute (creating useless tantrums every time)

19. There is a talk that you are very intelligent, handsome and awesome. I love rumours.

20. You are so important, I can’t live without you. I mean oxygen.

How are April flowers able to kiss? They use their Tu-lips.

Trees have to log-in if they wish to go online.

What is that one thing that goes up when the April rains come down? It is an umbrella.

What did the April Fools Day say when it finally won an award? You just got pranked.