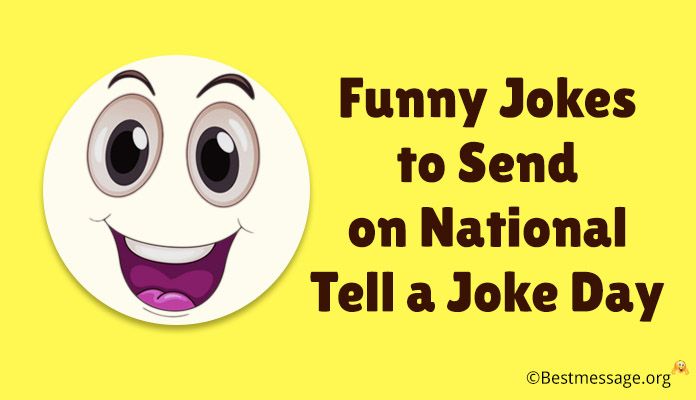 We have come up with a collection of some of the funniest jokes to share with your loved ones on National Tell a Joke Day on Facebook, WhatsApp etc.

1). What does a finger tell the thumb? It says that I am in glove with you.

2). A factory which sells good quality products is called SATISFACTORY!!!!

3). What is an alligator called who is also a detective…..??? He is called an Investi-gator.

4). What is that one thing that lights up a soccer ground….Well nothing but a soccer match!!!

5). It is actually pointless to write with a broken pencil.

6). Have you ever wonder that why do cemeteries have gates around them….. That is because people are dying to get inside.

8). Name one place where you can buy chicken broth in bulk. It is called stock market.

9). The two birds that stick together with each other are called Vel-crows.

10). You know what one tomato said to the other tomato during the race? Well, it said lets ketchup.

Hilarious Joke of the Day

11). I have invented a new word and that is Plagiarism.

12). There is a new restaurant in the town named KARMA. There is no menu as you are served what you deserve.

13). What does a claustrophobic astronaut want? Just a little space!!!

14). What did a left eye tell the right one? That between you and me, there is something that smells.

This page was last modified on Wednesday, August 07, 2019