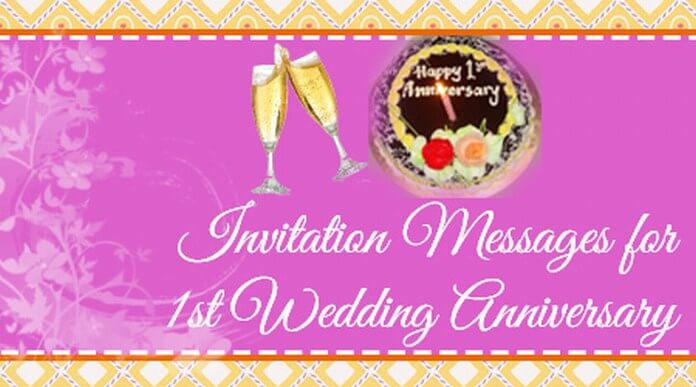 Let us see some of the samples of beautiful invitation messages etiquette for 1st wedding anniversary sent in different ways:

“I cordially invite you and your family to the anniversary surprise party tomorrow at my residence from 5 pm onwards. Kindly do not let my husband know about the party as it is a surprise for him.”

Funny invitations for the 1st wedding anniversary are humorous and are meant to bring a smile on the face of the receiver, either the husband or the wife. The funny invitations for 1st wedding anniversary can be sent through text messages with funny smiley or through cards with funny characters or funny quotes. One can also create a funny video with the funny moments shared between the couple and the anniversary wishes and send it to the partner.

“Its out anniversary and I cant believe I spent a year tolerating my wife’s tantrums. Here’s to more years of tantrum tolerance and I invite you and family to the anniversary party as I celebrate the day of my marriage.”

“I invite you all to the surprise party of my wedding anniversary at Royal Place tomorrow from 6 pm. Kindly make note not to let my wife know about it as it is a great surprise for her.”

“Through this beautiful card, I invite you and your family to the 1st anniversary surprise party to be held at our residence from 5 pm onwards. Do join us in celebrating this beautiful day and hopefully not inform my husband about this beautiful surprise for him.”

“Tomorrow I celebrate my anniversary, a year of saying goodbye to joyous bachelor life. Do join meat my residence at 6 in the evening for a party of beer and barbeque. Your gifts would be highly appreciated.”

“As I look forward to celebrate a year of lifelong commitment with my husband next Tuesday, I invite you and your family to the anniversary surprise party at my residence from 6 pm for the celebration. Kindly do not let my husband know about the party as it is a surprise for him.”

“I invite you over for food and wine at my place with worthy gifts as passes for a celebration of my 1st anniversary. Kindly note, one without gifts passes would not be allowed to enter or even peek.”