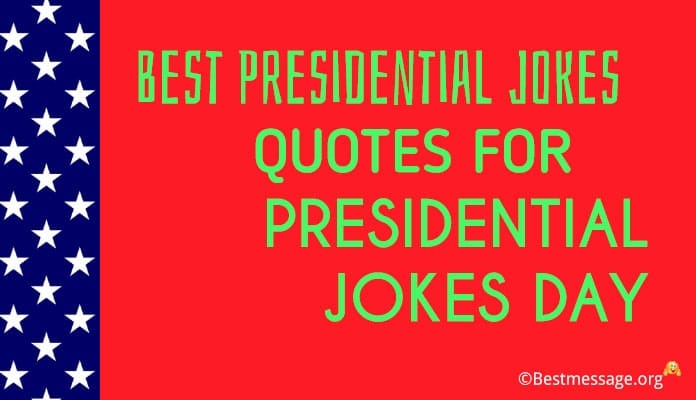 Every year Presidential Jokes Day is celebrated on August 11th. The idea is to celebrate the sense of humour of the president who is otherwise so serious and busy all the times. Share with your family and friends, the fantastic Presidents’ Day jokes and Presidential one liners. Have them all laugh with funniest president quotes which are so unique.

“Can you name the sixteenth president of USA?…. No, because we were never introduced.”

“What is probably the most amazing gift you can present George Washington?….. Well, an Exit Strategy from Iraq.”

“Name the most favourite instrument of Bill Clinton?….. It is a sexaphone!!!”

“What is one thing Americans have learn to do because of Stamp Act?…. They have learned to lick the British.”

“Name the tea all the American colonists always wanted?…. LiberTEA”

Name the biggest jokester ever seen in the army of George Washington?….. He was Laughayette.

“Where was the important Declaration of Independence signed?….. IT was signed at the bottom.”

“Statue of Liberty stands for what?….. I cannot sit down.”

“Why did Barrack Obama had a bulldozer run down on Rose Garden?….. He did not want BUSH.”

“Lincoln has been doing well in theaters, but apparently this is not true!!!”

“If the freedom of speech is taken away then dumb and silent we may be led, like sheep to the slaughter.” -George Washington

“Give me six hours to chop down a tree and I will spend the first four sharpening the axe.” -Abraham Lincoln

“When I was in England I experimented with marijuana a time or two — and didn’t like it — and didn’t inhale and never tried inhaling again.” -Bill Clinton

“Do you want to know who you are? Don’t ask. Act! Action will delineate and define you.” -Thomas Jefferson