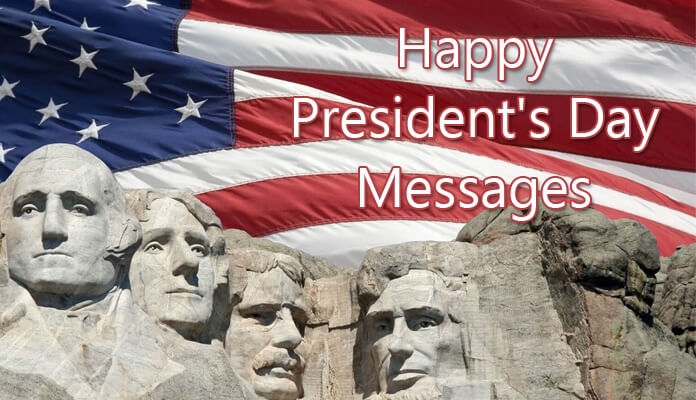 To wish your near and dear ones on President’s Day, we bring a wonderful collection of some of the most popular President’s Day Messages, quotes to send on Whatsapp or Facebook.

2). If freedom of speech is taken away, then dumb and silent we may be led, like sheep to the slaughter.” – George Washington

4). “May God save the country, for it is evident that the people will not?” – Millard Fillmore

5). “Nearly all men can stand adversity, but if you want to test a man’s character, give him power.” – Abraham Lincoln

6). Salute to all the great presidents who ruled our country. Your great deeds are always remembered. Happy President’s day

7). Hoe you have a great President’s day. We cherish all the great quotes said by them

8). If your actions inspire you to dream more, learn more and become more, you are a leader. Happy President’s day

10). To all the nation’s greatest president’s, who brought laurels to our country, a salute to you.

11). You don’t get everything you want. A dictatorship would be a lot easier. -George W. Bush

12). If you look at his portraits they always give you an indelible impression of his great height.  So does his life.  Height of purpose, height of ideal, height of character, height of intelligence.  ~David Lloyd George

13). Mute though his lips be, yet they still speak.  Hushed is his voice, but its echoes of liberty are ringing through the world, and the sons of bondage listen with joy.  ~Matthew Simpson

15). “The rights of every man are diminished when the rights of one man are threatened.” — John F. Kennedy

17). I had rather be on my farm than be emperor of the world. -George Washington

18). Politics is supposed to be the second oldest profession. I have come to realize that it bears a very close resemblance to the first. -Ronald Reagan

19). Focusing your life solely on making a buck shows a certain poverty of ambition. It asks too little of yourself. … Because it’s only when you hitch your wagon to something larger than yourself that you realize your true potential. -Barack Obama

20). Think about every problem, every challenge, we face. The solution to each starts with education. -George H.W. Bush

“It’s amazing what you can accomplish if you do not care who gets the credit.” ― Harry S. Truman

“If your actions inspire others to dream more, learn more, do more and become more, you are a leader.” — John Quincy Adams

“If freedom of speech is taken away, then dumb and silent we may be led, like sheep to the slaughter.” – George Washington

“Peace is a journey of a thousand miles, and it must be taken one step at a time.” – Lyndon B. Johnson

This page was last modified on Wednesday, February 13th, 2019