20 Lines on Navratri for Children and Students in English 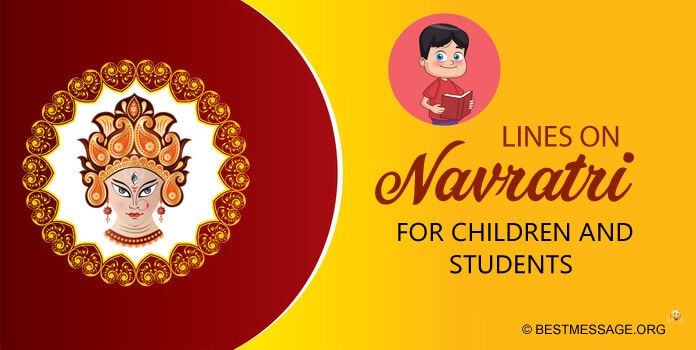 Navratri is one of the most significant Hindu festivals that lasts for nine nights and ten days. This festive occasion falls in the months of September and October and is celebrated with high spirits, lots of garba, fasts and feasts. This is an important occasion to share Navratri quotes and Navratri lines in English with children to make them aware about this occasion. You can use lines on Navratri or lines Navratri status to teach children about this festival.

In this post, we have come up with a collection of lines on Navratri for children/kids. Use these Navratri lines for higher class students and school children to help them know something more about this festival that is full of vigor and colors.

10 Lines on Navratri for Children/ Kids in English

Navratri is a Hindu festival that is celebrated across the country and by all the Hindus all over the world.

This festive occasion is the celebration of the victory of Goddess Durga over the demon Mahishasura.

It signifies the victory of good over evil and is celebrated for ten days and nine nights.

The first nine days of Navratri are called Navratri and the last day of the celebration is called Durga Puja, Vijaya Dashami or Dussehra.

On this occasion, the nine different forms of Maa Durga are worshipped, each one on one of the days of Navratri for the duration of nine days.

Garba celebrations for nine nights make an important highlight of Navratri which is a very popular form of folk dance in the Indian state of Gujarat.

The dance of Garba is performed around the Goddess Durga idol.

The occasion of Navratri is all about thanking Maa Durga and seeking her love and blessings.

Pandals are set up during Navratri with big and beautiful Goddess Durga idols that are worshipped for all nine nights.

10 Lines on Navratri for Students

The occasion of Navratri is considered to be one of the most pious times of the year by Hindus across the world.

Navratri, also known as Shardiya Navratri is observed in the months of September and October every year.

As per the lunar calendar, it falls in the Hindu month of Ashwin every year.

The festival of Navratri celebrates the triumph of good over evil and motivates everyone to follow the right path in life.

The last day of Navratri which is called Dussehra is the celebration of victory of Lord Ram over Ravana and on this day the effigy of Ravana is burnt marking the victory of good over bad.

Beautifully decorated and lit pandals are set up across the country on the auspicious occasion of Navratri where Maa Durga is worshipped every night.

People in the state of West Bengal celebrate Navratri with high spirits as Maa Durga is considered to be the most powerful Goddess in Indian culture.

In many parts of the country, streets are lit and decorated on the occasion of Navratri.

Navratri is the most beautiful festive time in India when people across the country engage in celebrations, festivities, fasting and feasts.