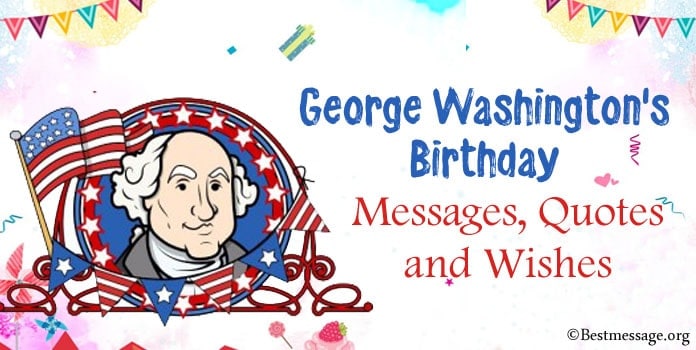 To make it easier for you, we bring to you the newest George Washington’s birthday messages and wishes. Have these quotes and greetings shared on Facebook, WhatsApp with everyone.

“On the occasion of George Washington’s birthday, let us all express our gratitude to him for all that he did to save our liberty.”

“Let us celebrate the birthday of George Washington by thanking him for such an inspiring president of our nation.”

“George Washington will be remembered forever because he has been the leader our country needed and we cannot thank him enough.”

“Warm wishes on the occasion of George Washington’ birthday. Because he was there in our past, we are happy Americans in our present.”

“To the most loved president, we extend our warm wishes on his birthday for he was a great leader. Happy Birthday George Washington.”

“Let us celebrate the birthday of George Washington to remember all the good he did for his nation and to be thankful to him.”

Be courteous to all, but intimate with few, and let those few be well-tried before you give them your confidence. True friendship is a plant of slow growth, and must undergo and withstand the shocks of adversity before it is entitled to appellation.”

“Nothing can be more hurtful to the service, than the neglect of discipline; for that discipline, more than numbers, gives one army the superiority over another.”

“Life is always uncertain, and common prudence dictates to every man the necessity of settling his temporal concerns, while it is in his power, and while the mind is calm and undisturbed.”

“Arbitrary power is most easily established on the ruins of liberty abused to licentiousness.”

This site uses Akismet to reduce spam. Learn how your comment data is processed.