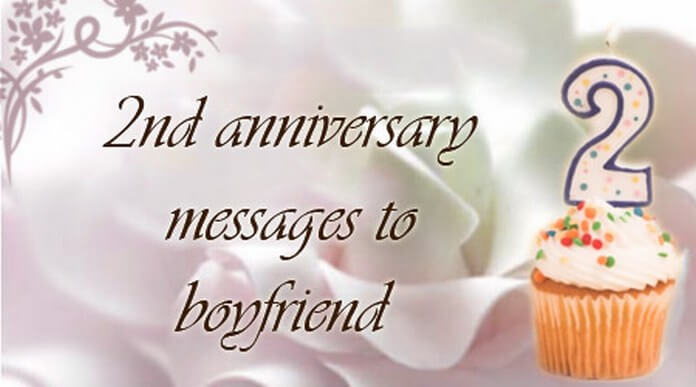 A list of a romantic 2nd anniversary message samples to your boyfriend is presented below:

1). I got a reason to live my life, I got a smile to be happy, I got a joy to cheer, because I got you in my life forever. Though it has only been two years, but it seems the relationship between you and me is longer. I want to spend the rest of my life with you to enjoy my life, happy anniversary.

2). I spend the cutest moments, and spend some sad too, we argue on something, but we love too. Sharing and caring is all about our life that makes our bonding stronger always. I love you is the truth of my life and I always be with you. Happy anniversary.

3). Today, you know me more than myself, you can read my silence, you dry out my tears even before rolling it down from eyes. When you are around, the world seems more beautiful. I wish the life stay the same forever. I love you.

4). No words are enough to express my love for you; but one thing I let you know, when you are with me, I have no fear of the world, but without you, the life is worth dying. I love you more than anything else in the world. Happy anniversary.

5). Leaning down my head on your arms, I can sleep without any worry; keep me in your heart always, as there is no place as beautiful as it is for me. Life seems perfect when you are around, I can feel the joy, happiness and all emotions of life only with you. Love you.