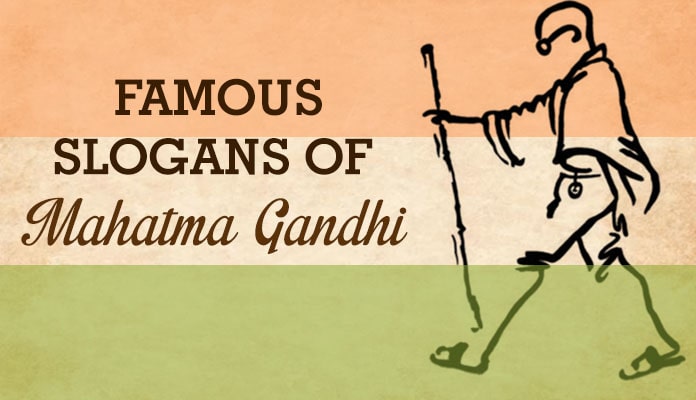 Slogans of Mahatma Gandhi: Gandhi Jayanti is observed on 2nd October every year. It is the birthday celebration of Mahatma Gandhi, Father of the Nation. It is one of the national holidays in India. Celebrate this important day by sending Gandhi Jayanti messages to your family, friends, colleagues, boss and everyone else. Share the inspirational Gandhi slogans for freedom to remind them of the sacrifices made.

Enjoy the huge collection of Gandhi Jayanti Slogans, mahatma gandhi slogans, Happy Gandhi Jayanti wishes. Send these famous slogans of Mahatma Gandhi to your near and dear ones. Use these Gandhi Jayanti slogans in Hindi and English to send best of wishes on Facebook, WhatsApp.

Ahimsa is the way which can bring peace in this world.

The toughest of goals can be achieved by the weakest of men following the path of righteousness.

A journey of thousand miles begins with a single step.

The weak can never forgive. Forgiveness is the attribute of the strong.

Let us join hands to celebrate the birth anniversary of Mahatma Gandhi.

We can survive and succeed in present times by following the footsteps of Gandhi.

Gandhi is an ideology which unfurls the secrets to live happy.

Bapu will keep inspiring for the generations to come.

Celebrating Gandhi Jayanti is not enough, it is also important to know its significance.

Check this : Lines on Gandhi Jayanti for Students and Children

Happiness is when what you think, what you say, and what you do are in harmony.

You must not lose faith in humanity. Humanity is an ocean; if a few drops of the ocean are dirty, the ocean does not become dirty.

The best way to find yourself is to lose yourself in the service of others.

Nobody can hurt me without my permission.

A man is the product of his thoughts; what he thinks, he becomes

The weak can never forgive, forgiveness is an attribute of the strong.

An eye for eye only ends up making the whole world blind.

This page was last modified on Monday, September 23, 2019